The Aave Protocol v2 is quickly growing in TVL, with already 35M$ in deposits even before the implementation of the V1→ V2 migration tool. Now, the time has come for the community to discuss the next major part of the Aave decentralisation process: governance.

The core of this AIP is to implement an option to bypass Step 4 of the AIP process, allowing any AAVE holder with enough assets to submit an AIP to the decentralised Aave governance.

Moving forward, the Aave Genesis Team will be just one of many innovation forces of the Aave Protocol.

The current model of the V1 governance only allows the Aave Genesis Team to submit AIPs as binding governance proposals. With this proposal, any Aave community actor meeting the requirements will be able to create an AIP for binding votes.

Users who possess a direct stake in the Aave ecosystem should have proportional power to govern it. Consequently, the new governance module aims to bring inclusivity, whilst simultaneously guaranteeing the safety and decentralisation of the Aave ecosystem.

Aave V2 governance is inspired by delegation-based governance models already on the market, while introducing 3 key innovations and a new layer of resilience:

Some of the expected short-term outcomes of this implementation are new actors creating proposals for token additions, risk parameter upgrades or new liquidity market creation.

For further understanding of the new mechanisms introduced in this proposal, please refer to the following diagram: 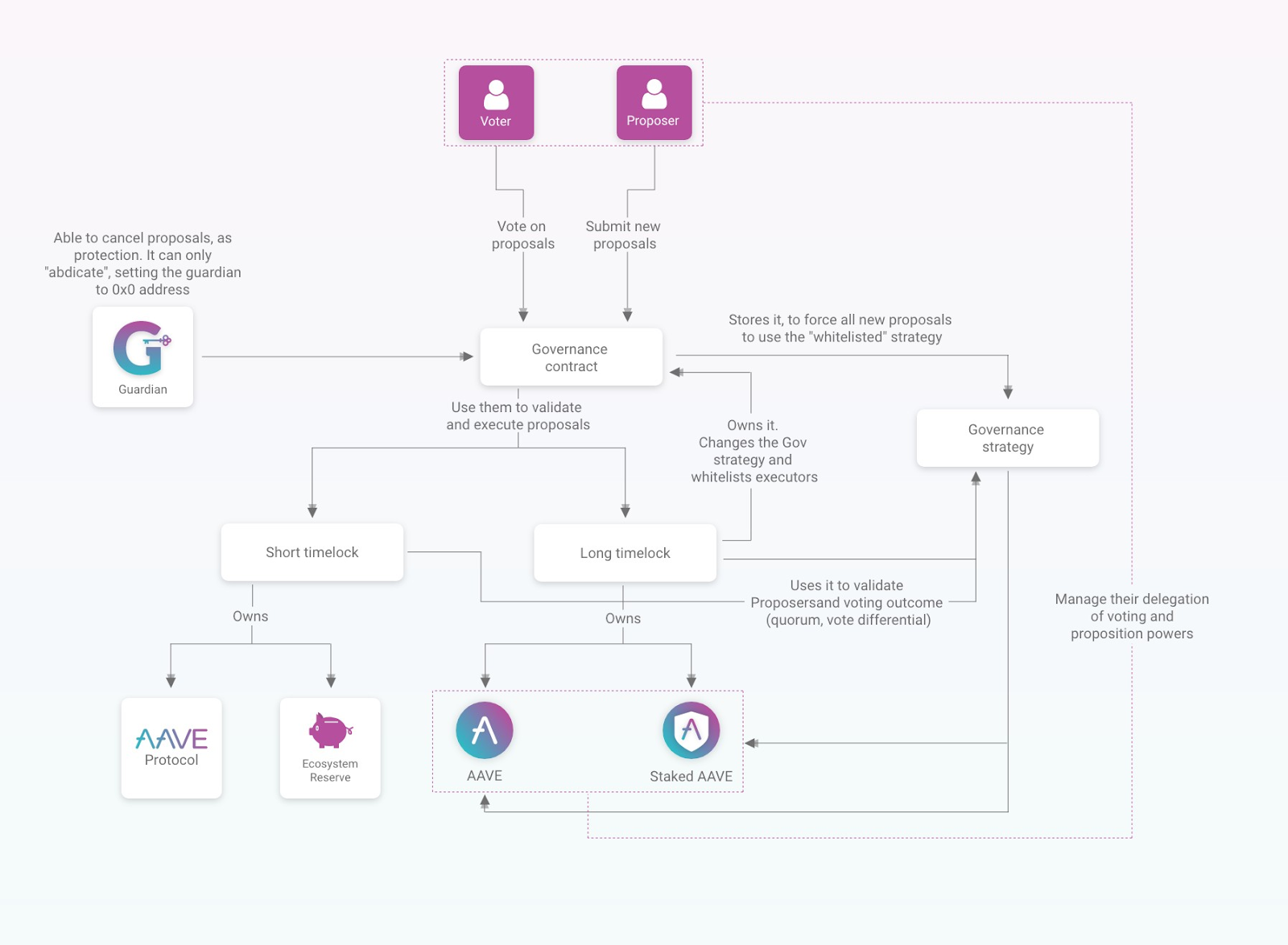 Excited to see governance come to light- and the guardian system is an interesting strategy to mitigate centralization risk. We’ve got a strong cast of guardians!

Similarly, for major token or governance upgrades, 42.5% against and 57.5% for would be the minimum ratio to pass, correct?

Lastly, when you state the quorum numbers, is this as is usually implied, where a 2% quorum means that at least 2% of the total supply must vote, regardless of voting direction?

Or is it the more recent definition of quorum, where a 2% quorum implies that at least 2%of the supply must vote for a certain proposal in order for it to pass?

Excited to see this roll out! Maybe I should become a delegate…

You are right on all the points:

The same questions confusing me too…

What about the proposition threshold? Is that the minimum amount of tokens accounting for the total amount for making a proposal? Specifically, a proposer need to hold at least 0.5% of the 16 million AAVE (80,000) to make a short timelock proposal. Is it like this?

Do we have a portal for delegate now? Or is it still in development process?

Aave is an Open Source Protocol to create Non-Custodial Liquidity Markets to earn interest on deposits and borrow assets with a variable or stable interest rate. The protocol is designed for easy integration into your products and services.