The purpose of this AIP is to list alUSD as a borrowable asset on Aave. alUSD has established itself as one of the leading new stablecoins in terms of stability and liquidity, and listing on Aave will provide users with a proven stablecoin to borrow. Alchemix has 376m TVL in the form of yvDAI and DAI backing alUSD, with a liquid supply of 239m alUSD. alUSD has one of the deepest Curve pools, with ~450m in liquidity. In addition to the Curve pool, alUSD has additional liquidity on Sushiswap, Saddle, and mStable. According to Parsec Finance’s StableRank, alUSD is routinely among the top stablecoins in terms of price stability and liquidity within 1% slippage. Having been on the market for over 6 months while maintaining the peg through turbulent market conditions, alUSD has built the reputation required to be an asset listed on AAVE. 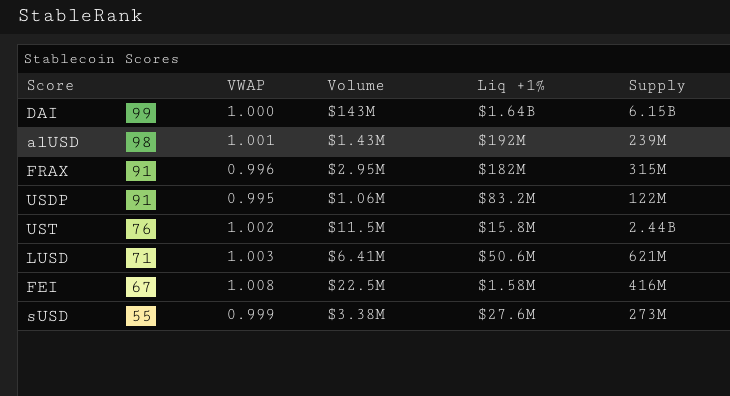 About Alchemix and alUSD

Alchemix is an evolution of the tried and true CDP model trailblazed by MakerDAO. Alchemix is, at its core, an overcollateralized stablecoin, much like DAI and other similar tokens. It has some key differences however.

Alchemix only mints like-kind or “mirror” al-Assets. For example, alUSD is only mintable by DAI (and later USDT and USDC), and alETH is only mintable by ETH (and later other ETH derivatives). Deposited collateral is then deployed to yearn, of which the earned yield doubly repays users’ debt and backs the dollar peg in the Transmuter module. In addition, there is no interest paid in the borrowing of al-Assets. Due to this structure, Alchemix does not have liquidations in its system. This allows people to maximum borrow without fear of shifting market conditions - taking an essentially risk free negative interest alUSD loan with their DAI. In effect, the system acts as a way to get an advance on your yield for your stablecoin deposits.

Alchemix ensures the alUSD peg with the following mechanisms.

These mechanisms in tandem have allowed for alUSD to remain extremely close to the $1 peg since its inception.

alUSD has established itself as a reliable and liquid stablecoin. In addition to protocol improvements, Alchemix DAO believes that integrating alUSD throughout DeFi will help us in that goal. Because AAVE is the leading lending protocol across all of crypto, getting on AAVE as a borrowable asset would lend a lot of legitimacy to alUSD. The more tightly integrated alUSD is within DeFi, the more resilient it will become, which will allow alUSD to safely grow in supply.

Going forward, Alchemix will expand beyond our current set up of using DAI in the yvDAI yearn vault as collateral, and expand the selection of stablecoin collaterals and yield earning strategies. AAVE is one such source of yield that we are looking to plug into in the future. When these upgrades take place, we predict that Alchemix will be one of the larger liquidity providers to AAVE, similar to how Alchemix is currently one of the largest liquidity providers on Yearn.

alUSD is desirable to borrow because it is tightly pegged to DAI, USDC, USDT, mUSD, FEI, FRAX, and LUSD in our various markets. It is simple to swap between other stables. DEX aggregators make it simple to trade between alUSD and any other asset on Ethereum too. In addition, there are attractive farming incentives for alUSD LPs. For people that are looking to borrow alUSD but don’t have stablecoins from which to mint it, borrowing alUSD on AAVE will provide more options to get alUSD. The alUSD can be used for yield farming, or through highly liquid swaps into other stable coins, to finance their personal life or to speculate on the market. alUSD is also used in an alETH/alUSD options market on premia.finance. Alchemix plans to continue to expand alUSD use cases in the future through partnerships and integrations.

Certik Audit for the Core Contracts:

Currently the Alchemix protocol can be paused or modified by a multisig. The protocol controls the alUSD debt cap and collateralization ratio through DAO voting, which is then executed by a community + developer multisig + timelock contract. The DAO prioritizes peg stability above all else when considering parameter changes.

Aave has already conducted risk analysis on DAI, the current sole backing stablecoin of alUSD, and assigned an overall risk rating of B+ (Risks per Asset - Risk). USDC and USDT strategies will be added as alUSD collateral later. USDC and USDT have ratings of A- and B+ respectively. The new risks from introducing alUSD are Alchemix/alUSD and Yearn Vault contract risks. Risk to Aave is minimized due to alUSD being enabled for borrowing but not as collateral.

The Alchemix DAO multisig and timelock wallet is the administrator for the alUSD token. It has the ability to grant and revoke other contracts the minter role. Currently, all alUSD minting is handled by the alchemist.sol contract. When we launch our version two, the new contracts will also be granted the minting permissions. Alchemix employs a modular approach where the Transmuter and Vault Adapter modules can be swapped out and replaced with upgraded versions. The core alchemist.sol contract cannot be upgraded, but the multisig and timelock wallet can change the following parameters: collateralization ratio, debt ceiling, and fee percentage. Each member of the core Alchemix development team has permission to enable Alchemix’s sentinel mode, which pauses the contract in case of an emergency.

After the forum RFC and community sentiment snapshot vote pass, Alchemix will push a PR with the necessary payloads to the Aave GitHub adding alUSD to the assets list.

alUSD will only be used for depositing and lending, not as collateral. The following parameters are proposed:

Base LTV As Collateral: 0

AlUSD is a great asset for V3 and emode.

Having alUSD in V2 as a 0% LTV asset is a great first step to future inter-protocols synergies.