This proposal is primarily motivated by a desire to reduce the risk of governance attack against MakerDAO and corresponding collateral damage to other defi infrastructure. At the same time, the proposal is structured to minimize impacts on Aave usability and reserve growth.

Maker governance is resilient against most forms of governance attack due to a two day timelock delay on proposal execution, and the ability to cancel malicious proposals in the timelock with sufficient voting power. But Maker’s emergency shutdown mechanism can be triggered without any delay, and this presents a potential risk that a well capitalized attacker would be able to accumulate the 150,000 MKR required to shut down the protocol. A hypothetical attacker could be motivated by profit (potentially able to profit through short positions on MKR, other defi tokens, or large cap crypto assets) or other goals such as causing damage to defi infrastructure for political reasons.

MKR liquidity on exchanges is fairly low, which means it would be prohibitively expensive (and potentially not even possible) to purchase a sufficient stake to trigger shutdown over short time periods. But lending protocols such as Aave and Compound provide a much more efficient means of acquiring MKR for an attacker; borrowing tokens does not incur any slippage or market impact, and an attacker’s final net cost may be significantly reduced if they could repurchase MKR at a lower price after triggering shutdown.

Implement the following changes to the Aave MKR market on Ethereum:

Based on the current status of the Aave MKR market (~35% utilization, 8,200 MKR borrowed), this would result in the following impacts for users and the Aave protocol:

See the below figure for current and updated interest rate models based on utilization rate. Data is included here. 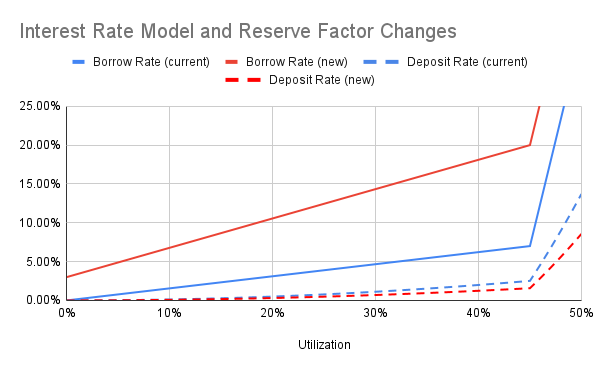 There changes to the MKR market parameters could have second order effects over time, including:

Finally, these changes would have the following impact on risk and cost of emergency shutdown attack against MakerDAO governance:

Following community discussion, the proposal will be posted to Aave’s Snapshot space for an initial, non-binding poll poll.

The relevant Snapshot link will be posted in this forum thread once available.

Assuming the poll vote resolves favorably, the proposal will be submitted as a full AIP to the Aave governance forum, followed by an on-chain vote to implement the proposed changes.

Once Aave v3 is available on Ethereum, Aave governance will have the capability to set asset specific borrowing limits. At that time, author will pursue an additional proposal to re-enable MKR borrowing with a 5,000 MKR token borrow limit similar to the existing limit in place on Compound. This will allow Aave to continue to provide borrowable liquidity to users and earn MKR reserves, while mitigating risk of governance attack against MakerDAO.

This proposal is made available with “no rights reserved” under CC0.

This proposal does not represent financial, legal, regulatory, or tax advice, and is not an offer to sell or solicitation of an offer to buy any asset. Readers should seek their own professional guidance where appropriate. Data, projections, and forward looking statements are shared “as is”, on a best efforts basis, and are provided without any guarantee of correctness, completeness, validity, or fitness for a particular purpose.

thanks @monet-supply for this proposal.

As V3 on mainnet is at this point weeks away, i would suggest considering adding a borrowing cap to MKR there that might achieve the same results with less need for complete overall rework of MKR risk parameters.

Main historical use case of MKR is to be used as collateral and not as a borrowable asset, and the 23598 MKR of current liquidity (15k available now) has never been deemed as a significant risk in the past.

the current proposal would just reduce the yield of the current aMKR holders and might create inconvenience and costly tx fees to move out for little benefit for both ecosystems.

Maker community has had heightened concerns since some usage of borrowed tokens in governance last month, but if v3 is planned to launch soon I agree that it makes more sense to just add a borrow cap to the v3 market.