This proposal is a batch update of risk parameters to align with the the Moderate risk level chosen by the Aave community. These parameter updates are a continuation of Gauntlet’s regular parameter recommendations.

This set of parameter updates seeks to maintain the overall risk tolerance of the protocol while making risk trade-offs between specific assets.

In addition, we propose to enable utilizing FEI as a collateral on Aave. The initial parameters for FEI will be an LTV of 50%, a Liquidation Threshold of 60%, and a Liquidation Bonus of 6.5%. Most of the stablecoins that can be used as collateral are more liquid, and our platform’s analysis recommends initially capping the amount of collateral that can be liquidatable to the average daily trading volume. If user behavior and market conditions over the coming months continue to show safe conditions for increasing capital efficiency on FEI, we shall recommend ramping up the LTV and Liquidation Threshold incrementally.

This past week did not see outsized changes in market conditions nor within the Aave protocol. There were slight volatility drops and increases in trading volume and liquidity for most assets. Our platform recommends the following set of parameter changes that will decrease liquidation bonuses on several less-utilized assets.

The community should use Gauntlet’s Risk Dashboard to better understand the updated parameter suggestions and general market risk in Aave V2. 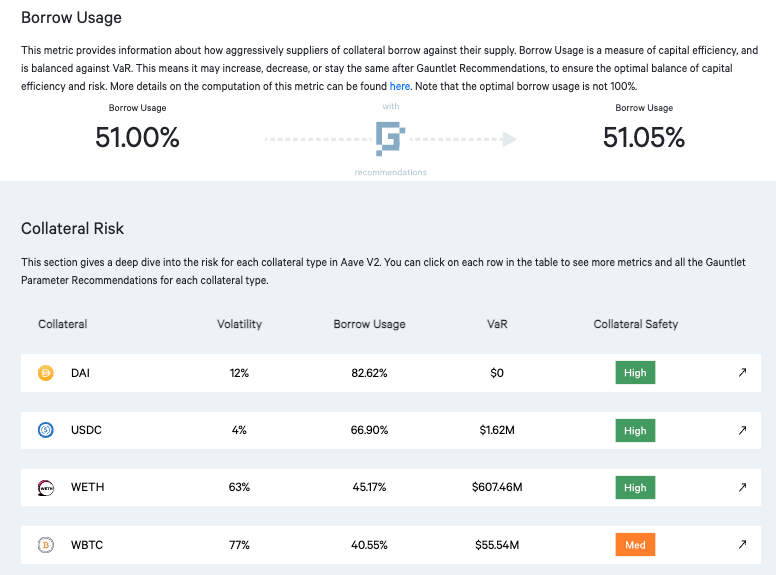 Link to the Snapshot vote below:

@Pauljlei notice that most of these assets have been subjects of recent hype and sector trends.

DeFi, Curve Wars, and the Metaverse are all represented in this list.

Is this coincidental or reflective of a surge in demand by users?

I don’t know if there’s any precedent to it, but it doesn’t feel right to include upgrading an asset to collateral in the risk parameter updates. It seems like it ought to be done in a separate proposal, when the asset was initially onboarded as borrow only.

It gives off the feeling of shoving a potentially controversial change into a bill that’s generally, for better or worse rubber stamped.

That is a really good point

Thank you for your thoughts, @supahjoe and @JeremyKeating . For context, there has been no precedent for this, but following community feedback and internal discussion, we have decided to split into separate proposals moving forward in order to allow the community to make more granular decisions. We will put up an on-chain proposal to upgrade Fei to a collateral asset on Tuesday, January 18th. Following this proposal, we will make a separate proposal for our regular set of parameter recommendations. As always, we will cancel/revise our regular set of parameter recommendations should market conditions change significantly and our simulations dictate it necessary.

Thanks @fig - while we do not make the parameter updates in response to the “hype”, there have been increased market liquidity and trading volume in these assets. These parameter recommendations reflect the market data (which includes increased user demand, as you suggested) which has indicated that market conditions including volatility and liquidity of assets have improved, making it safe to update these risk parameters to increase capital efficiency.

Were the minting permissions and other potential technical risks of FEI thoroughly analysed before the decision for activation as collateral @Pauljlei ?
It is pretty important to have a good overview of them before this critical decision.

It is another good point @Pauljlei. Has there been any assessment of the governance and smart contract risks? I know it is the sort of thing the risk DAO would be good for. These risks are more important if the assets is going to be used for collateral
Do you have stats on FEI’s deviation from the USD? I think I remember something about it being fairly volatile - maybe that was early on

Hey all! Thanks @eboado for asking about the more technical risks of FEI here. I think FEI’s financial risks have been well covered by @Pauljlei and others on other threads.

The FEI stablecoin is a vanilla ERC20 with one additional functionality for minting to any address which is controlled by the MINTER_ROLE. fei-protocol-core/permissions.ts at develop · fei-protocol/fei-protocol-core · GitHub is a list of all the access roles in the system. The Minter contracts are all battle tested and audited, and used for peg stability and PCV management. The GOVERN_ROLE is capable of granting new minters, which is held by our DAO timelock. This means that the DAO could in theory mint arbitrary FEI, but this needs to be passed by a majority of token holders. If a malicious proposal were enacted, the security guardian would be able to veto and prevent it from going live. The Security Guardian is a 3/7 multisig with members comprised by Fei Labs core team.

Of note, FEI used to be able to burn FEI from any address via the BURNER_ROLE but this was deprecated in FIP-54.

Also, since June the stability mechanism is 1:1 redeemability of FEI for PCV (with a fee/spread). PCV is diversified and 225% collateralized: Fei Protocol

Thanks for the information @Joey-fei .
In my opinion, then it is reasonable to have FEI as a collateral asset, given the good synergies between Aave and the FEI ecosystem during these last months. I would say that in case of the proposal passing, it is pretty important for people associated with FEI to keep the Aave community updated here in the forum (or through any other channel) about all new decisions happening affecting monetary policies, like for example addition of new minters by the GOVERN_ROLE.
As a piece of feedback for the opener of the thread (@Pauljlei representing Gauntlet), in my opinion it is completely mandatory in case of proposing any activation as collateral (or in general anything affecting non-quantitative configurations of assets) to include a technical analysis, including detailed risks like those described by @Joey-fei . For what I understand, it is not the expertise of Gauntlet, so in that case I would suggest to engage since the start the team associated with the asset.

I would say that in case of the proposal passing, it is pretty important for people associated with FEI to keep the Aave community updated here in the forum (or through any other channel) about all new decisions happening affecting monetary policies, like for example addition of new minters by the GOVERN_ROLE.

Will be sure to keep the aave community in the loop! We circulate all major protocol upgrades broadly through out various comms channels and with our partners. Hope to see this proposal pass!

Thank you, @eboado . We appreciate the feedback and moving forward, will coordinate with the team associated with the asset to provide the Aave community with a technical analysis ahead of voting.

Excited to see this proposal pass to strengthen the FEI and Aave ecosystems, and looking forward to collaborating on future proposals that drive growth for the protocol.