Enable USDT as collateral on Aave v3 on Avalanche

This is a proposal to enable native USDT (https://tether.to/en/) as collateral on the Avalanche V3 Market.

As far as stablecoins go, both DAI and USDC are currently enabled as collateral and we believe that USDT has a similar risk profile and should not be treated differently. Enabling USDT as an additional option for stablecoin collateral on Aave should help safeguard against the inherent risks of any specific stablecoin failing and increasing diversity. There has been a longstanding view that Tether proposed additional risks that were not present in other stablecoins. In fact, USDT is the longest-standing stablecoin and has met redemptions in strenuous markets in the past.

This specific parameter was never debated in the Aave governance forum and we believe that it would be valuable to start a community discussion around the topic.

In response to any previous controversies surrounding USDT, Tether has taken significant steps towards increased transparency. It should be seen as a positive that USDT & Tether are under heightened scrutiny, as opposed to many other assets and organizations that are not subject to the same extensive disclosure requirements and regularly undergo external auditing.

It is important to note that USDT is the oldest and most widely distributed stablecoin in the market. There have been numerous occasions whereby market conditions deteriorated and Tether was able to satisfy all the necessary redemptions.

We believe that an objective analysis of the risks associated with USDT shows that it has a similar risk profile to the other stablecoins listed on Aave & enabled as collateral and that there is no reason why it should only be listed in isolation mode.

As a baseline for our analysis, we will use the risk scale provided in the Aave documentation for evaluating new assets (Methodology - Risk): 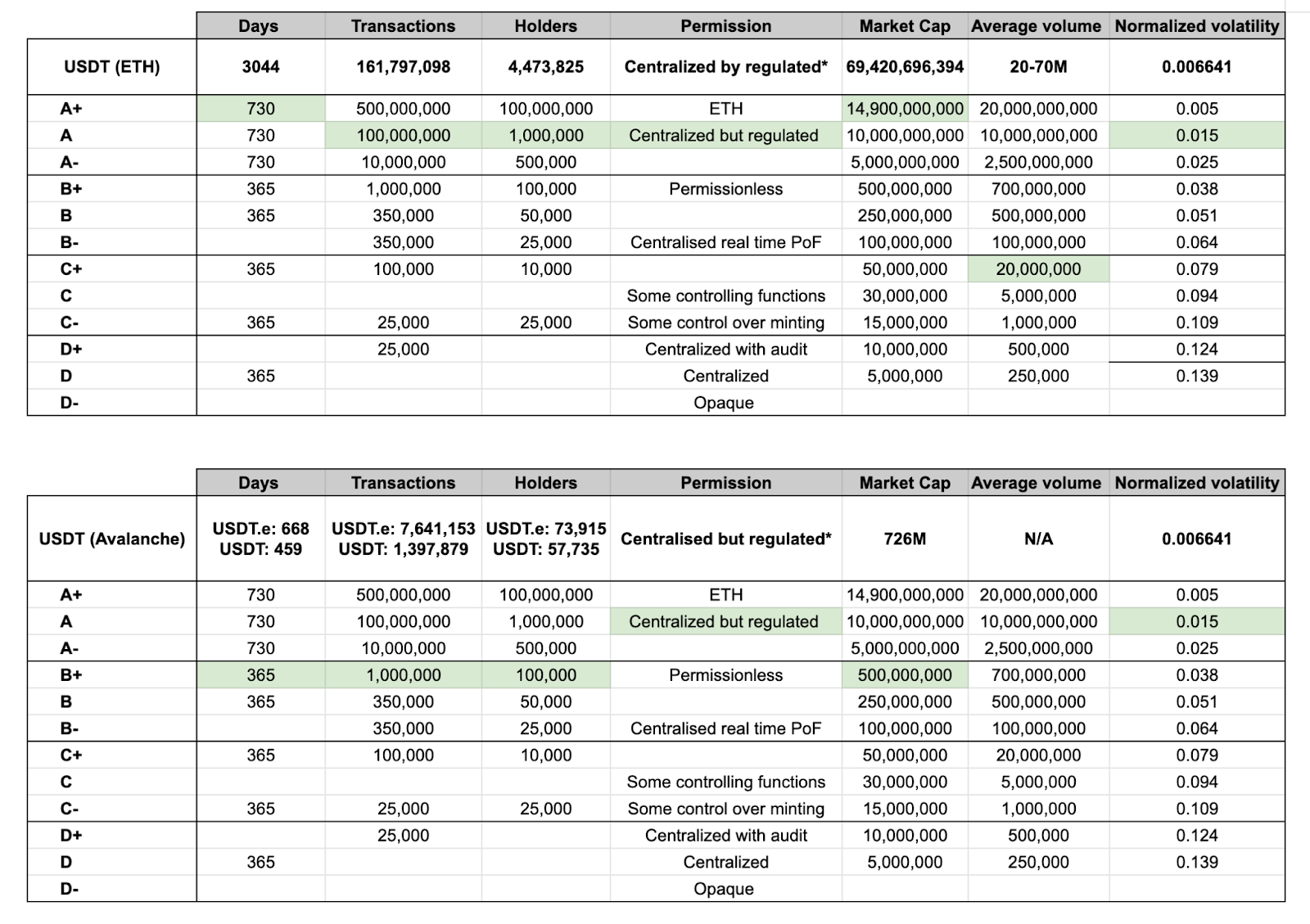 What is immediately clear is that USDT scores well in multiple areas as it has been around since 2014 and has remained mostly stable throughout its history. It is also widely adopted and transacted across blockchains and remains the stablecoin with the highest market capitalization.

A point of contention could be Tether’s classification as “centralized but regulated”. Tether claims that it is registered as a money services business with the Financial Crimes Enforcement Network (FinCEN). This is admittedly not equivalent to being regulated by entities such as the New York State Department of Financial Services (NYDFS) like other major stablecoins are. Whether this counts as regulated is ultimately up to interpretation and USDT could also plausibly be classified somewhere between “centralized with audit” and “centralized real-time PoF” on the scale above.

While it is never possible to completely rule out smart contract risk, it’s clear that in the case of USDT, this risk is relatively minimal as the asset does not rely on a complex set of smart contracts like a typical DeFi protocol, which significantly reduces the vector of attack.

Counterparty risk is arguably the most significant risk factor to consider in the case of USDT. Tether is the only entity through which USDT can be minted and redeemed by corporate customers and exchanges. This is similar to other centralized stablecoins such as USDC. Due to this level of centralization, Tether has taken steps to increase the transparency of its reserve (see reserves breakdown & audits below) and has been regularly audited.

USDT is pegged 1:1 to the US dollar. This is guaranteed by the official minting and redemption process. However, most users acquire and trade USDT through centralized & decentralized exchanges. Given how liquidity pools and AMMs work, there have been instances where USDT has depegged, trading at less than $1 for a short period of time before returning to its peg.

Launched in 2014, Tether tokens (USDT) pioneered the stablecoin model and are the most widely traded. Tether tokens offer the stability and simplicity of fiat currencies coupled with the innovative nature of blockchain technology, representing a perfect combination of both worlds. USDT is 100 percent backed by Tether’s reserves and Tether tokens have grown in popularity over the past few years, with a market cap of over US$70 billion (as of November 2022). Tether tokens allow customers the ability to transact across different blockchains, without the inherent volatility and complexity typically associated with digital tokens.

USDT is already integrated into multiple DeFi protocols within the Avalanche ecosystem such as Trader Joe, Platypus Finance, Pangolin, Benqi, and Paraswap.

The number of transactions: 9M

We look forward to discussing this proposal with the Aave community and strongly encourage you to contribute to the discussion and provide feedback. We will be posting a vote on snapshot in 7 days to evaluate the community’s sentiment on this proposal.

@luigidemeo88 thanks for making this in depth and much needed proposal.

DeFi needs to start treating centralized stablecoins equally, specifically USDT and USDC, we are in no place to decide for users what they should or should not be using. Tether has tackled a significant amount of FUD over the years and due to this has shown resilience.
Furthermore being the main stablecoin in terms of volume on centralized exchanges having USDT as collateral on Aave could help the DeFi ecosystem as a whole with driving more volume.

The snapshot vote for this proposal is now live: Snapshot

Would love to talk with the @Ava_Labs team / @luigidemeo88 regarding this proposal. Can someone send us a DM?

Can’t figure out how to send a DM here but feel free to reach out to nadz6 on telegram. Always happy to chat!

Thank you for this proposal, @luigidemeo88 and @Ava_Labs. Below, we provide Gauntlet’s analysis.

Gauntlet’s risk assessments focus on market risk. Notably, the main risks that USDT poses to Aave (if it is enabled as collateral) is not market risk but rather other risks that are highly difficult to quantify (e.g., proof of reserves, counterparty risk, etc.). The community must consider their risk preferences when assessing the risk/reward tradeoffs of enabling USDT as collateral outside of isolation mode. To clarify - USDT is currently enabled as collateral on V3 Avalanche but in isolation mode.

To help inform the community of the risk/reward tradeoffs, here are several potential risks should USDT be enabled as collateral:

None of this is to say that Gauntlet has quantified the risk of depeg. Gauntlet cannot quantify the likelihood that USDT depegs as it depends on factors outside market risk. We simply provide more context to the community on the risks that USDT as collateral would pose to Aave under the scenarios outlined above.

Here’s a quote: “Crypto is going through tough times. The only question is if those lessons have been learnt. I honestly don’t think they have yet…” - the entire article is worth a read: Tether's NGMI

If we haven’t yet learned that the lesson of FTX is trusting centralized entities is inadvisable without exceedingly strong proof, with the burden of proof on the centralized entity (admittedly, your proposal was made before FTX), then maybe we need to embarrass ourselves some more to bring this lesson more clearly to learn to stop trusting people so easily.

DeFi is the solution because AAVE (among other protocols) has functioned perfectly smoothly through all the events of 2022 due to rigorous contracts and vetting of collateral.

Going forwards with this after the events of this month seems almost a wilful refusal to learn any lessons from one failure after another. If anything, we should be reevaluating the other custodial tokens and their derivatives rather than adding more.

Blockchain at Berkeley voted against the snapshot proposal to add USDT as collateral. Given the ongoing insolvencies of centralized entities still unfolding- we are not confident at this time to onboard USDT as a collateral asset.

FranklinDAO (Penn Blockchain) voted no on this proposal. We had a very productive chat with Luigi and were happy to learn a bit more about this proposal. Our main reasoning for this was the we believe the LTV is too high in current market conditions.

Our main reasoning was this: 70% LTV lets users effectively 1/(1-0.7)= 3.33 leverage if they were to loop their USDT. In times of high FUD in the past, USDT has dropped 6%+ for extended periods of time. With this high of leverage, and at a 70% LTV, substantial risks of bad debt and further other asset markets being under strain might arise.

This is why we believe if USDT were to be added as collateral, we should start off with a 20% LTV before upping that number in the future if things go well / more reserve transparency is provided. Would be interested to see Tether themselves respond and give feedback here!

After some productive conversations across the Aave community, we will be pulling this vote and resubmitting after updating some of the variables.

The market timing and general fear has made the original ARC which did not receive much negative feedback moot. Stay tuned.

At the moment, it is clear that there is some inconsistency in the params/evaluation of them for reserve-backed assets (probably for all assets, given that the aforementioned Risk Framework, should be a living document), but from my perspective, enabling as collateral USDT on Avalanche v3 means that it should be enabled everywhere where there is direct minting, even with considerations of extra protections on v3.
Probably following that of enabling it everywhere is not so good decision at the moment.


Additionally, I think it is important to again highlight the point by Gauntlet.

To clarify - USDT is currently enabled as collateral on V3 Avalanche but in isolation mode.

In my opinion, the way to go is increasing a bit more meaningfully the debt ceiling of USDT on Avalanche, together with following the same approach on the upcoming Aave v3 Ethereum. If we consider the potential use cases of USDT as collateral, they should be relatively well covered by having more “room” in terms of debt ceiling, given the current borrowable assets in isolation.