Since the aim of an interest rate model is to balance the market of borrowers and suppliers, the interest rate in this example is a function of utilization, defined as the ratio of borrows to available supply. For most protocols, the function is chosen to target a relatively stable level of utilization, while limiting risk near the liquidation threshold. The Aave interest rate algorithm uses a two-part linear function with four adjustable parameters, as shown below: 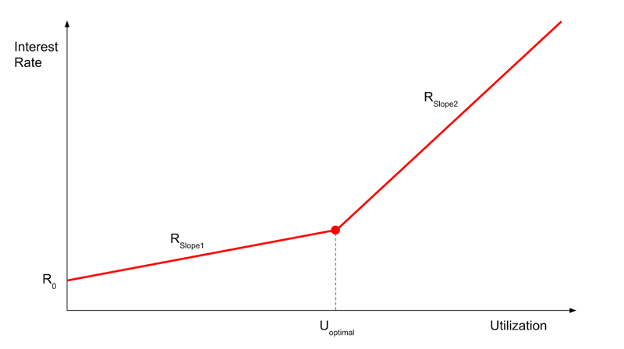 In the first range, when utilization is low, rates increase linearly with utilization at slope Rslope1. Once utilization exceeds a certain level, rates are increased more sharply for further borrowers with a higher slope Rslope2. To both maintain adequate reserves and incentivize suppliers, the interest earned by the protocol is split between reserves and supplier interest. This introduces an fifth parameter, the reserve factor, into the optimization problem for interest rates:

As described, this mechanism is effective at maintaining utilization, incentivizing suppliers and building reserves, provided appropriate parameters are determined. However, since the balance between borrowers and suppliers is complex and subject to various feedback loops, the effects of changing interest rate parameters may be counterintuitive.

The mechanism through which changes in interest rates are transmitted to the market is user elasticity, defined as the change to a user’s supply or borrow position in response to an interest rate adjustment. In practice, elasticity may be different for borrowers and suppliers, thus affecting utilization and having feedback effects on prevailing interest rates. Furthermore, elasticity may be non-linear, which combined with the inherent nonlinearity of the interest rate curve at certain levels of utilization could greatly magnify the effects of small changes. Finally, changes in interest rates may also affect the profitability of users with complex or recursive positions, which could result in abrupt inflows or outflows from the protocol. 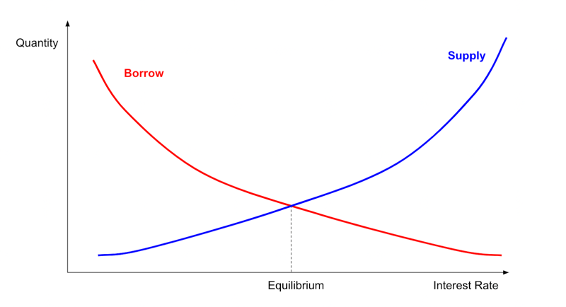 Since balancing these risks and benefits is a challenging task, there have been various proposed ways to move interest rates automatically based on market data. Though work in this area is promising, it is essential to note that new mechanics can also introduce risks. In a recent paper, we explored how strategic users could manipulate a PID controlled interest rate curve to earn a disproportionate share of protocol interest. By driving up interest rates with aggressive borrowing, a user could profit from the higher rates via a type of price manipulation attack called yield scraping.

In a follow-up paper, we will present a more general analysis of automated interest rate controllers, and the possible approaches protocols could take. While most of these concepts are still theoretical, there may be interest rate mechanisms that would make protocols more capital-efficient and resilient in volatile environments. Our initial recommendations will focus on optimizing parameters within Aave’s existing framework. As interest rate mechanics develop, we aim to support Aave in developing new strategies and addressing some open questions regarding future direction, such as:

We welcome the community’s thoughts on these points and look forward to a productive discussion. We aim to provide our first set of recommendations by November 21st, which early modeling suggests will target stablecoin markets.

This is outstanding work from the Gauntlet team, data informed decision-making in relation to financial parameters such as interest rates is an excellent approach to ensuring that the borrower and supplier market is adequately balanced while the risk is managed effectively.
This is an excellent methodology for determining interest rate parameters for various Aave assets, I hope this proposal receives the support it deserves when it moves to a governance vote.