This proposal is to initiate collaboration between Aave and IoTeX. To power our vision for MachineFi, IoTeX has built unique infrastructure to bring verifiable data from machines, such as Pebble Tracker, to blockchain Dapps. Real world data opens up a brand new design space for Web3 where users can earn digital assets/reputation based on their physical activities – parametric insurance, tokenization of machines, IFTTT based on “proof of anything” (just to name a few). We would love to work with Newt to craft PoCs and explore this intersection of MachineFi x DeFi with the Aave community.

With >$300M TVL, IoTeX also has one of the fastest growing DeFi ecosystems today, and we hope to provide grants to bring Aave V3 to IoTeX. The rest of this proposal explains IoTeX in more detail, as well as areas of exploration at the intersection of DeFi x MachineFi.

Raullen Chai, Co-founder at IoTeX is submitting this proposal on behalf of IoTeX.

Founded in 2017, IoTeX is an EVM-compatible Layer 1 blockchain that powers an ever-growing ecosystem of DeFi, GameFi, NFT, and MachineFi applications. IoTeX is headquartered in Silicon Valley and is backed by a global team of 50+ top tier engineers, research scientists, and operators from Google, Facebook, Uber, Bosch, and more. IoTeX also leads several industry/research bodies including the IEEE, IIC, MOBI, and CCC. Explore our open-source code on Github.

As of March 2022, the IoTeX ecosystem consists of 100k+ users, 10,000+ devices registered, 150+ projects/partners, and $300M+ TVL (including staked IOTX). IoTeX has processed tens of millions of transactions since our Mainnet launched in 2019 and has developed award-winning products such as Ucam and Pebble Tracker that are used by thousands of people/devs around the world. 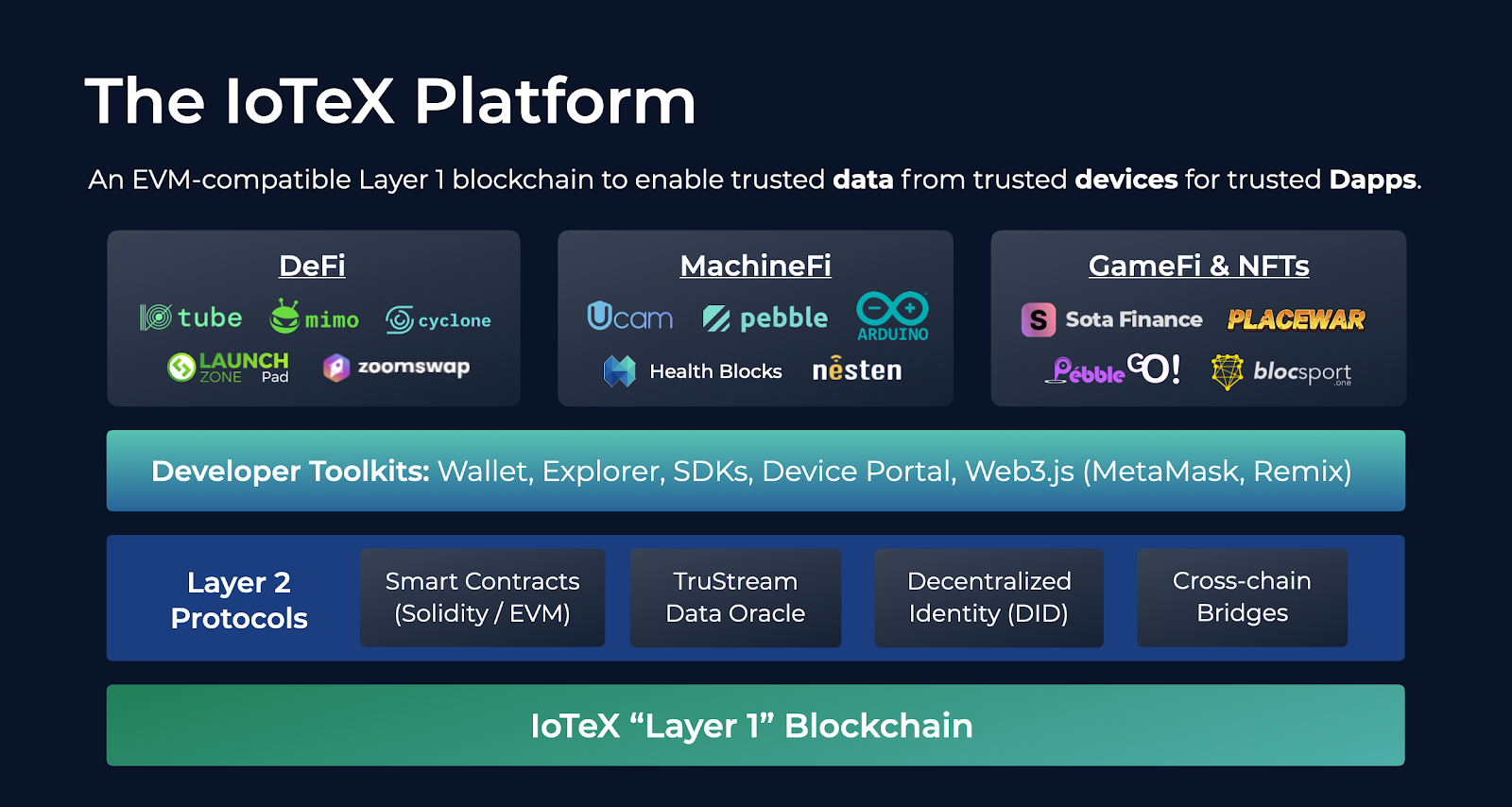 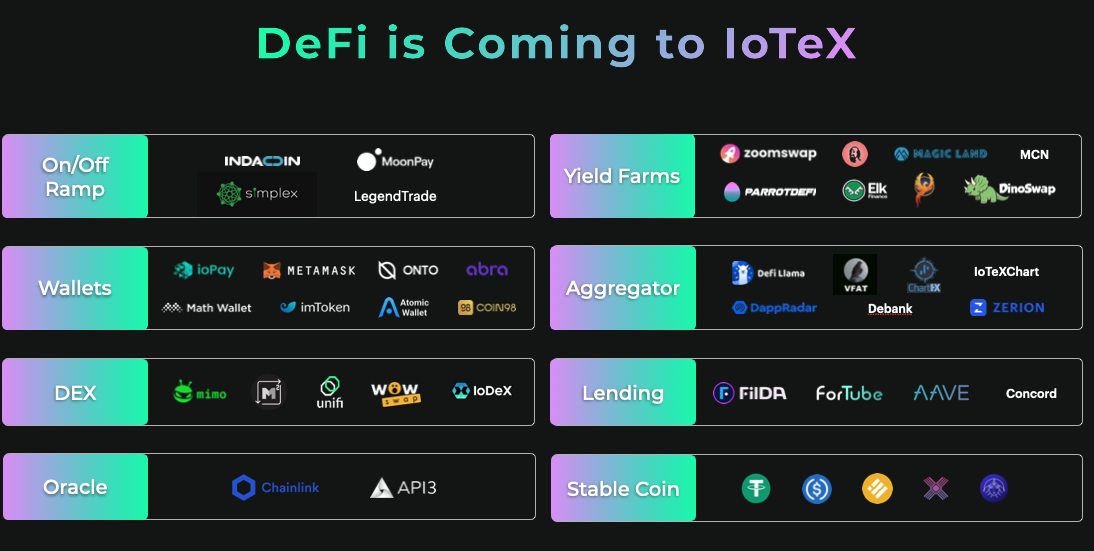 By 2030, the Internet of Things (IoT) will consist of 100 billion machines that produce 80 trillion gigabytes of data – McKinsey estimates the IoT will be worth $12 trillion in value. Who will own these machines, data, and value? IoTeX’s vision for MachineFi is to empower everyday people and businesses to own and control their machines, as well as the data/value they generate.

To empower MachineFi, IoTeX has built first-of-its-kind infrastructure and tools that synchronize with our Layer 1 blockchain:

Proposal for the Aave Community

IoTeX is inspired by what Aave has offered to the crypto industry as pioneers in DeFi and money markets. By bringing Aave V3 to IoTeX, Aave will be the first major money market protocol on IoTeX and expand its user base to our global community of 100,000+ monthly active users. We hope to bring Aave V3 on IoTeX Testnet to start, and eventually launch Aave V3 on IoTeX Mainnet with attractive liquidity incentives to bring DeFi on IoTeX to the next level.

“All of Web3 is an experiment. And we want to jumpstart and contribute to the breakneck pace of innovation happening in the space.” – Newt website

We couldn’t agree more. IoTeX has lived at the experimental forefront of blockchain x IoT for the past 5 years – we’ve developed prototypes like AvoBoard that have never been publicly launched, as well as real world products like Ucam and Pebble Tracker that are used by thousands of normies, developers, and crypto-natives around the world. To put it simply, we’ve put in our 10,000 hours into the blockchain x IoT sector and are the perfect partners to bring new innovations to Web3.

Aave has extensive “real world” experience, most notably with RWA Market in partnership with Centrifuge. But there is so much more to explore in bringing real world assets to blockchain – with 100 billion machines coming by 2030, machines will be our future workforce and Web3 will ensure the data, services, and value generated by these machines will belong to us, the people. Some MachineFi x DeFi areas we wish to explore with Aave core team, Aave DAO, and Newt:

As next steps, we would love to hear the Aave community’s feedback on this proposal to deploy Aave V3 on IoTeX as well as to explore the exciting intersection of DeFi x MachineFi. If we see sufficient interest, we can further detail out an action plan and conduct a Snapshot vote to move things along. Special thanks to Ajit and @MarcZeller for their ideas and feedback on this proposal!

Iotex to the world baby!

. It is one of the best crypto I’ve ever known. Wow, the team is awesome.

Looking forward to this proposal becoming a reality! #machinefi #defi

I would Love to see Aave on the Iotex Network.

The transaction coast are Cheap and everybody could use Aave.
Right now for for starters is it hard on the Ethereum Network. Always there are the high fees which will leave many with nothing. Personally I don’t use anything on the Ethereum network because of this.

I think many of me are like me beginners starting with small Investments and this is Possible on the Iotex Network.

We would love to join you with cheap fees

Could we please stop spamming again in here with, sorry to say, useless comments from the IoTex community. I love to see the excitement for people to have Aave deployed, but still the comments should be in some way useful and start a discussion.

With Aave Defi infrastructure + IoTeX Machine Economy integration will surely spark a lead in the world of DeFi, A rising markets.

Yeah, aave and iotx is a great project, if can deploy aave v3 on iotex will more great👍🏻

Great proposal. I would like to know how the cooperating machine makes money for me, can you elaborate? Am I the only one who thinks this way?

Iotex is the chain with the greatest future and greatest exponential growth. developing innovative products that intertwine the physical world with the blockchain. When the machines do all the work we will see the powered by iotex label on all of them

IoTex definitely bringing a new type of finance to the table! Hope this passes

Would love to have AAVE leading the charge in the upcoming cyber-physical possibilities of money legos. This is the gwei!

IoTeX is one of the most solid projects with greatest potential I have ever known. It is focusing on connecting IOT devices in the real world with web 3 metaverse. The data now your smart devices are collecting from your daily life could be tokenized into digital assets and you will be the only owner of your digital assets, not the device manufacturer or someone else. This is sooooo cool!
I could not imagine how big the positive impact on the web 3 world if Aave collabrates with IoTeX. At least, I could imagine the huge benefits to fans of both projects like me. We could tokenize the data collecting from our daily life via IoTeX’s MachineFi portal, and then utilize these digial assets on Aave’s DeFi platform to provide liquidity and earn profits from them.
I am 100% spport this proprosal: Let’s make DeFi x MachineFi happen!

Aave surprises with the V3.
Connected with ioTex, a wide range of Maxhine-Fi assets will flow into Aave, bringing even greater surprises to our community.

Hi EzR3aL, we would love to get your feedback on this proposal and potential questions arising on the deployment of AAVE V3 on IoTeX. Happy to start a discussion with AAVE community and answering any questions/feedback the community have.

Thanks Charlie for your question. AAVE is acting as a money market for collateralized assets including crypto assets and potentially extending this services to non-crypto assets such as real estate loan, financial instruments and also cash generating machine. The owners of those cash generating machines as mentioned in the proposal can actually unlock their capital which is heavily locked into machine equipment through a special AAVE market for machines asset.

Thank you so much for your reply, I can’t wait for AAVE to be deployed on IoTeX

Full disclosure: I work at IoTeX doing marketing work. The work we’re doing at IoTeX is fundamental, that is, we’re building a new vertical that integrates actions in the real world with Web3. By being able to rely on the identity of a machine or a person and enable both to be financial actors, we’re entering a new world. Partnering with AAVE would further this goal of making a MachineFi economy and benefit both of us.

Raullen mentioned, above, the informed estimates of the potential market size. $12 trillion dollars. That is a staggering market size. This is not a short pump and dump effort. I believe both companies are in this for the long term and will do so by creating real value for individual people and companies. Let’s make this a reality.

This is a good introduction to IoTeX, still more information is needed to understand how IoTeX works and its risks

Could you please answer the questions of the Aave Asset Onboarding Guide as well as a risk assessment follwing Methodology - Risk? This is the process that covers all the relevant information is shared and allows to compare assets on the same metrics