With Aave v3 about to be deployed on Ethereum and a wstETH and ETH eMode likely, the ETH Interest Rate should be adjusted such that the looped recursive strategy breaks even within Slope 1 where the Interest Rate changes are less volatile.

The new interest rate curve has an Interest Rate of 5.75% at the Uoptimal point, which is 25 bps more than stETH yield at the time of writing. This proposal will lead to improved capital efficiency of the ETH Reserve and generate more revenue for the DAO when compared to just replicating the v2 Interest Rate curve on v3 with the introduction of an ETH eMode Category.

For the existing v2 market, @llamaxyz suggests adopting the same Interest Rate parameters as being proposed on v3. This will enable the ETH yields across the markets to somewhat equalize leading to higher utilization of the ETH Reserve and more revenue for the DAO.

By changing the Interest Rate at the Uopotimal point from 3% to 5.75%, when an eMode for ETH and wstETH is created on Aave v3 the recursive strategy will break even prior to reaching the Uoptimal utilization within the Reserve. This is a desirable feature as the volatility of the Interest Rate on Slope 1 is less than Slope 2. By setting the Slope 1 parameter at 5.75%, 25 bps greater than the current annual wstETH yield, utilization in the Reserve is not expected to reach the Uoptimal level for any prolonged period of time. By reducing the Slope 2 parameter, from 100 to 80, the gradient of the second part of the yield curve increases due to an increase in Uoptimal from 70% to 80%. This is subtle and can be seen in the chart below. The Base Rate for the existing Interest Rate and proposed Interest Rate is unchanged at 0%.

The graphic below shows the changes in the interest rate. 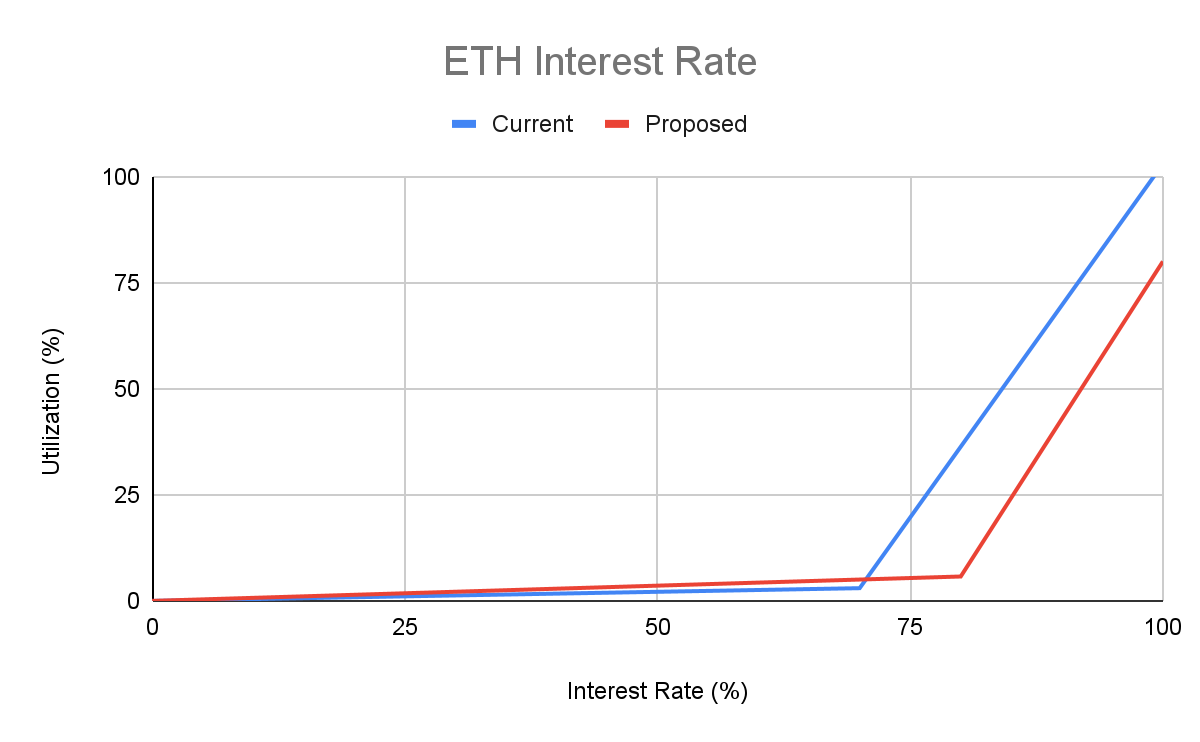 This proposal increases the Reserve Factor from 10% to 15%, directing 15% of the interest paid to Aave DAO. When combined with the Interest Rate changes, the v2 deployment will generate an estimated $13.1k per day, up from around $5.5k per day. Prior to this proposal, due the implementation of AIP-68, the Aave DAO is earning less revenue from the ETH Reserve post merge despite utilization within the Reserve increasing significantly over that time, [2].

The below table shows the current and proposed changes to the ETH Reserve on Ethereum v2 and Ethereum v3 when deployed.

I am in favour of increasing the Slope 1 and increasing the reserve factor collections, it makes sense given the arbitrage that exists and rewards depositors more fairly for the use of their tokens as leverage.

However the Uoptimal measure is a risk metric and you have not given any risk analysis supporting the change or showing the impacts. I don’t think we can simply look at increased revenue for the DAO in insolation.

The DAO is already the largest holder of stETH with >20% of total supply, more supply in fact than of wETH. Do we want to encourage a further increase on this? We need to remember that despite the merge, stETH is not yet redeemable 1-2-1 for ETH, and the same dynamics that lead to the depeg earlier in the year still apply.

We can also not ignore how concentrated aWETH holders are, with the top 3 addresses controlling >25% of the supply. With higher slope1 curve and Uoptimal rate, there is very little room if any of these actors pull liquidity, which could lead to stETH unwinds and depegs.

Maybe I am wrong, but would want to see some risk analysis supporting the changes. I think we still need to be cautious here until stETH is truely liquid and depeg risk is minimised, especially given v2 doesn’t have the ability to implement supply caps.

Thanks, @bayesiangame for your thoughts and analysis. Gauntlet is analyzing the potential market risk implications of this proposal and will return to the forums. 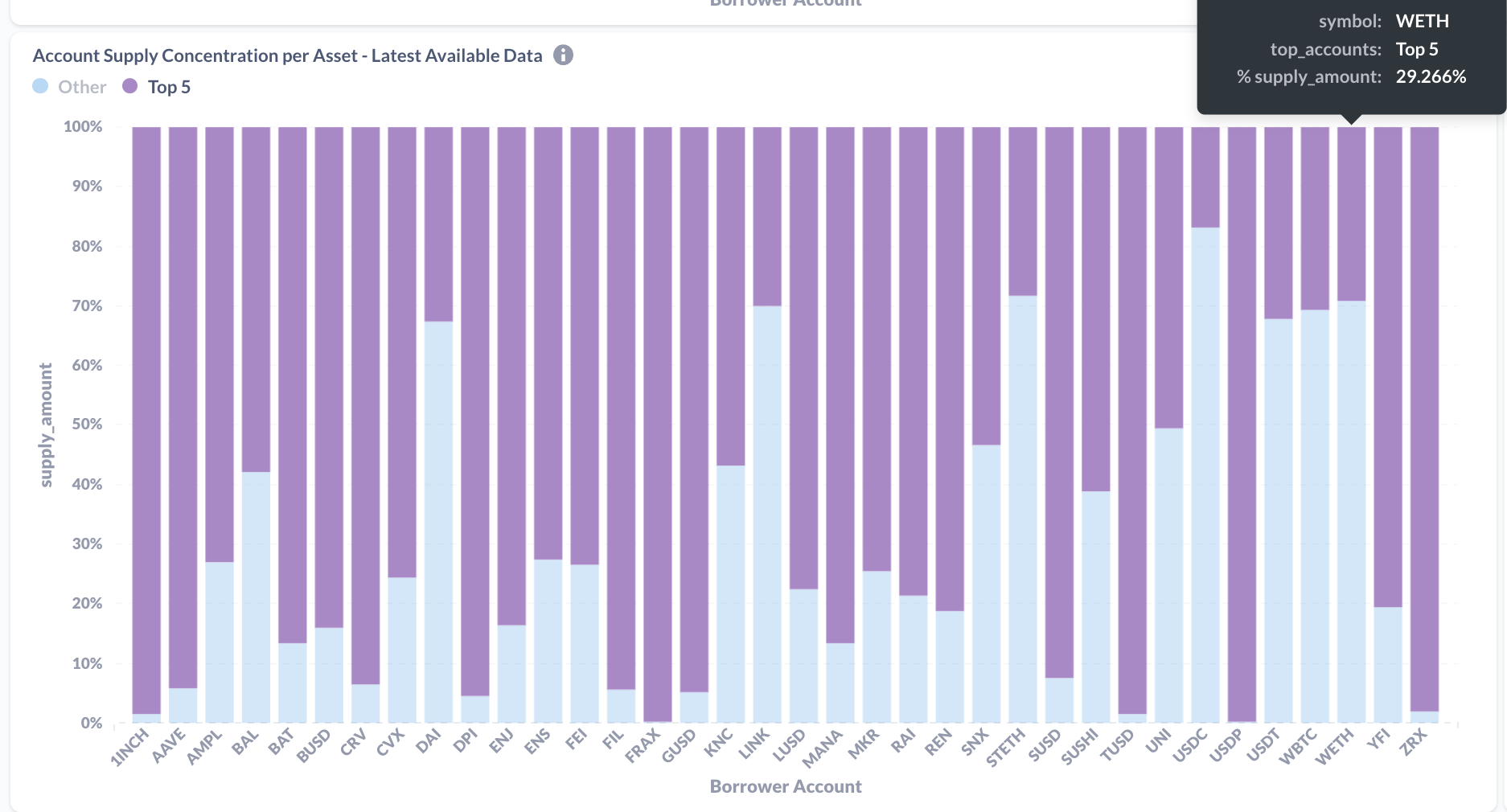 Our systems observe ample liquidity in the stETH/wETH market. The slippage/liquidation curve suggests that a $220mm market sell of stETH through 1inch only incurs 1.5% slippage, implying a liquid market.

Gauntlet currently has no recommended adjustments to Llama’s interest rate recommendations. We also compliment the @Llamaxyz team for following best practices here and waiting for risk analysis before submitting a vote.

Thank you for sharing Gauntlet’s insights on the forum and supporting the proposal.

We have proceeded to create a Snapshot for the community to vote on with voting to start in a little over 24hrs.

We hope everyone can participate in this vote and we thank all participants in advance for taking the time to vote.