There have recently been proposals in the forums by both Aave Companies and Llama on listing LP tokens as collateral on Aave. Below, we provide an analysis of the market risks to help the community make an informed decision on the revenue/risk tradeoffs.

LP shares are undoubtedly one of the most prevalent assets (net liquidity, number of asset holders) in cryptocurrency. In particular, Uniswap V2 and Balancer style LP shares have strong properties under large liquidations (c.f. “How Liveness Separates CFMMs and Order Books”). However, choosing collateral factors and loan-to-values for these assets can be complicated due to the nature of arbitrage against these assets.

Gauntlet is continuing to analyze the potential market risks of the specific proposals. In the meantime, we wanted to provide a more general analysis of enabling LP tokens as collateral in this post.

There are two main cases to consider:

We believe understanding this distinction is crucial to choosing LTVs.

Let’s assume a user borrows asset A against asset A/B LP shares. This use-case can present significantly more risk to the protocol than the alternative use-case of depositing A and B assets separately as collateral and then borrowing asset A.

is a liquidation tolerance that can be tuned. In particular, we should think of the collateral factor for borrowing A against an A/B LP share as needing to have the following form:

where DiscountFactor(1) = 1 and DiscountFactor(0) = 0. Fitting this discount factor in practice depends on understanding how often the LP share is traded against (e.g., high accrued fees let us use a more aggressive discount factor) and how frequently arbitrage occurs. One thing to note is that the discount factor needs to account for liquidations that execute against the same LP share. Part of the issue is that if liquidations execute against the LP share, you can have the LP share value disagree with the Chainlink value and complex attacks such as the xSushi attack become possible (albeit with a lower profitability margin). Modeling the discount factor and its dynamic behavior is crucial, but a simple way to measure what it should be is to choose a very conservative cf first and gradually increase it based on monitoring the above features.

Let’s assume a user borrows asset C against asset A/B LP shares. This use case can present even more risk than Case 1.

We cover how to reason about this mathematically in Appendix A of the same paper. We construct a relationship between the collateral factors for borrowing C against A and C against B and that for borrowing C against A/B LP shares. You will note that the condition from case 1 (which was an equality) has been weakened to an inequality. Part of the reason for this is that even if we assume no-arbitrage, one has to account for the correlations between assets A, B, and C. It is possible for assets A and B to be correlated and assets B and C to be correlated, but assets A and C to be anticorrelated (c.f. Simpson’s Paradox, Cointegration). Why does this impact borrowing asset C against asset A/B LP shares?

If we think about asset A/B LP shares as a fixed-weight portfolio being rebalanced by arbitrageurs, we effectively need to consider the following “liquidation condition”:

Normal collateral factors can be set only depending on the mean and variance of the price process pAC. But for LP shares, you need to model the entire covariance structure of assets A, B, and C. Why? Even in no-arbitrage there is a correlation triangle between trading three assets. 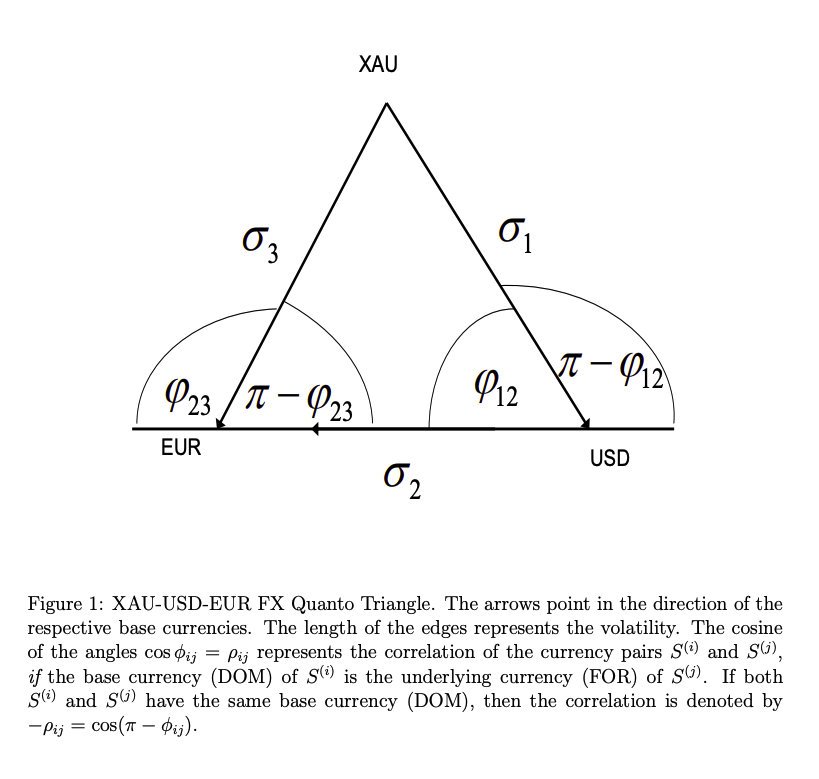 This triangle has edges equal to the volatility of each asset pair, whereas the cosine of the angle of each term represents the correlation between the different asset pairs. The law of cosines allows you to compute the correct change of numéraire to write everything only in terms of two assets plus the asset correlations. This excess correction lets you write the variance of one currency in terms of the other two, e.g.,

— worsens LTV / collateral factor behavior. Why you might ask? It basically says if A/B are correlated, then when the price of C crashes (relative to numéraire or either A or B), the borrowed asset crashes faster than you might expect if it was a borrow against either A or B alone!

Now, this is all done in no-arbitrage — in reality, there are liquidity constraints, and you may have asset C/A synchronized with the oracle price faster than asset C/B. In such conditions, the asset should be liquidated even sooner than expected because we’re measuring the liquidation condition against delayed data. As such, again, we should start with lower collateral factors than either the C/A collateral factor or C/B collateral factor. One suggestion is cfC,A/B CFMM = 0.25 min cfC,A,cfC,B where cfC,A is the existing collateral factor for borrowing C against A (and similar for cfC,B).

There is a lot of extra risk, even in no-arbitrage (perfect conditions), with borrowing against LP shares. Our analysis shows that the CFMM collateral factors should be lower than any of the associated collateral factors until we observe some stability and can compare how CFMM loans compare to raw underlying loans.

Very interesting writeup, Could you please clarify this part a bit more:

Arbitrage loss (loss vs rebalancing ) is a non-linear function. For example, if the price of B declines, then the value of the A/B LP share (the collateral) will be lower than the value of simply holding A and B (arbitrage loss + impermanent loss). But importantly, the function of arbitrage loss + impermanent loss with respect to the price decline of B is not linear (equation 12 in Gauntlet’s paper; with greater B price decline, the loss increases even more, and faster).

At the end of the day, afaik, the value of USDC/ETH LP token, does not depends at all at the arbitrage losses, but rather only at the price of USDC and ETH. If anything, there might be some extra profits due to swap fees.

What is it that I am missing? Afaik there are no arbitrage losses, and the impermanent loss function is actually sub linear.

Thanks, @yaron and Risk DAO, for looking into this. Impermanent loss (loss vs. holding) and loss vs. rebalancing are undoubtedly crucial in setting risk parameters for LP tokens.

Loss vs. rebalancing (LVR) and loss vs. holding (IL) are two different frameworks to understand the AMM. The LVR framework assumes LPs are continuously rebalancing the portfolio, which better captures the profit extracted by arbitrageurs. Please refer to Tim Roughgarden’s talk at SBC '22 to better understand the LVR framework. For simplicity, we dive into loss vs. holding below, which is more intuitive to comprehend via example.

The math you outlined above is incorrect. One of the fundamental equations in DeFi is x*y=k. Under trades without removing/adding liquidity, k never changes (assuming no fees). With a 50/50 ETH/USDC pool, if ETH = 1k USDC, and the LP value is $1, then the pool has 1 ETH and 1000 USDC and:

Risk parameters for Aave should be tuned with a strong understanding of the impermanent loss function and loss vs. rebalancing of the LP tokens.

I think you are right about the actual math. but still 50% decrease for a price drop of 75% is sub-linear.
My point was that arbitrage losses, impremenant loss and all other kind of losses are already embedded in the price of the LP token, which is highly predictable given the prices of the underlying assets (which are of course hard to predict). And the volatility of the LP token is highly predictable given the volatility of the underlying assets. In fact, afaik the volatility is ETH/USDC lp token vs USD is exactly half of ETH volatility.

Also for reference, MakerDAO give higher ltv for their ETH/DAI uniswap v2 lp token wrt ETH (with the same stability fee).
MakerDAO system is different as it has caps, and therefore some of the concerns you expressed in the writeup might be applicable to aave but not to maker. So my comment is only about potential further losses, and whether the loss is sub linear or not.

Risk parameters for Aave should be tuned with a strong understanding of the impermanent loss function and loss vs. rebalancing of the LP tokens.

Obviously I didn’t try to do any rigorous analysis as of yet, but i am curious why one have to understand/analyze all these losses, rather than just analysing the LP token as a black box with 50:50 holdings (with xy=k, and x/y = price), and ignore the fees. All losses are embedded in this black box model to my understanding, and I am trying to see what is it I am missing.

(*) The liquidity considerations you mentioned are also valid, and could change the picture, but at this point I am trying to figure out the loss aspect.